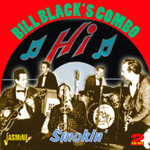 Bill Black was famously the bass player in Elvis Presley's early backing trio, and he played on all of Presley's 1950s hit records. In 1959 he got together with Ace Cannon (sax). Carl McVoy (piano/organ) and Reggie Young (guitar) to form Bill Black's Combo.

The late '50s/early '60s were the 'Golden Era' for Rock & Roll Instrumentalists and Bill Black's Combo had a wholly unique, instantly identifiable sound and style.

This compilation comprises their first three LPs in their entirety plus their first nine singles, all of which were major US hits including four million-sellers, 'Smokie (Part 2)', 'White Silver Sands', 'Josephine' and 'Don't Be Cruel'.

This body of work is almost impossible to find elsewhere on CD.