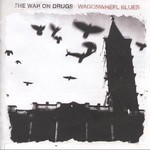 The first full-length by the War on Drugs is at once an album of its time -- indie rock as collection and collage of classic rock sonic signifiers that rank former tourmates Neil Young and Sonic Youth as equal inspirations -- and something that stretches beyond those expectations. That may sound like damning with faint praise, but given indie's crisis of confidence in itself in the 21st century, finding all sorts of "real" rock to hold on to as a rear-guard action against pop's all-devouring reworking of world-wide sounds, hearing a band that doesn't sound beholden to create some sort of huge statement with their album is rather refreshing.

Adam Granduciel's role as frontman is the kind of slightly strangled vocal signifier that could make one group of listeners think of Bob Dylan or Ian Hunter, and another of Half Japanese, while just as similarly the full band lineup seems to want to constantly move easily back and forth between an older set of sounds and a slightly newer one, with a definite bias towards the kind of lush guitar atmospherics that found a congenial home in the U.K. in the '80s and early '90s. (Though sometimes the balance is fully skewed, as with the post-shoegaze chime and shimmer of the instrumental "Coast Reprise.")

A sign of the kind of mix-and-match at play comes early on with "Taking the Farm," which sounds as much like the Cocteau Twins as it does like a Tex-Mex romp, while "A Needle in Your Eye #16" might be the slyest Spacemen 3 tribute ever, taking all the elements from that band at its best (droney gospel keyboard vamps, blunt drumming, rapture via psychedelia) and recombining it with their own specific stamp thanks to Granduciel's singing. In all, an unexpected delight.

Side A:
Arms Like Boulders
Taking The Farm
Coast Reprise
Buenos Aires Beach
There Is No Urgency

Side B:
A Needle In Your Eye #16
Reverse The Charges
Show Me The Coast
Barrel of Batteries