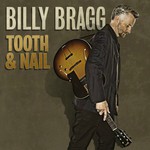 With Joe taking Billy out of his comfort zone (all vocals were recorded live without retakes or overdubs) the album features an accomplished crew of musicians, including Greg Leisz (Bon Iver), Patrick Warren (Lana Del Rey), Jay Bellerose (Regina Spektor) and David Piltch (Ramblin' Jack Eliot). The spontaneous results are, according to Billy, a return to the rootsy sound of 1998's 'Mermaid Avenue' sessions he recorded with Wilco - drawing on soul, country and folk music influences to explore the ups and downs of relationships that have stood the test of time.