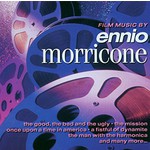 Ennio Morricone was probably the most famous film composer of the 20th century. He was also one of the most prolific composers working in any medium. No exact figure is available, but he scored over 500 films over several decades, plus many dozens of classical works. While his film scores were in almost every imaginable musical style (and for almost every imaginable kind of movie), he was most identified with the "spaghetti Western" style of soundtracks, which he pioneered when providing the musical backdrop for the films of director Sergio Leone. Morricone's palette was extraordinarily diverse, drawing from classical, jazz, pop, rock, electronic, avant-garde, and Italian music, among other styles.
All Music Guide.

Featuring many of his most famous works including "The Good, The Bad and The Ugly", "Once Upon a Time in the West" and "The Mission", this collection is a great budget-priced introduction to Ennio Morricone's vast catalogue.