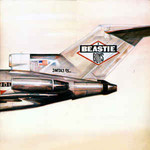 Who woulda thunk it? More than a decade after its release, this detention-hall classic remains a must-have among college freshmen everywhere. The Led Zep samples. The jerky postures. The joiky boy accents. If you couldn't get with this record you might as well have been bumpin' Dan Fogelberg. Taking radical black music to a white, suburban audience with rock-rap jams that righteously blew wind in the face of everything Reagan America stood for, Mike D, Ad Rock, and MCA -- three middle-class kids with punk rock backgrounds -- were the most exciting rock 'n' rollers of the '80s. But what's amazing about this 1987 classic at the end of the '90s is how fresh it still sounds. Master P ripped off his whole shtick from the moanin' chorus on "The New Style," and rock 'n' techno stars like the Chemical Brothers owe a huge debt to funky blowouts like "Rhymin' & Stealin'." LICENSED TO ILL was the bastard spawn of the Rolling Stones and Run-DMC, and it changed the face of pop music forever. Master P should be so lucky.

Rhymin' & Stealin'
The New Style
She's Crafty
Posse In Effect
Slow Ride
Girls
Fight For Your Right
No Sleep Till Brooklyn
Hold It Now, Hit It
Brass Monkey
Slow And Low
Time To Get Ill