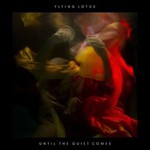 On his fourth album, Ellison not only peels away layers from his sound but organizes his tracks into a gracefully flowing sequence. The producer once again draws from numerous instrumentalists and vocalists, from Brainfeeder associates Stephen "Thundercat" Bruner and Austin Peralta to the likes of Erykah Badu and Thom Yorke. Bruner has the most presence. His tremulous basslines are on nine of the album's 18 tracks, and his spaced-out, quasi-oracular vocals poke through on occasion, such as on an 80-second track that is titled after a natural psychedelic compound and references the title of Ellison's 2010 EP. True to Flying Lotus form, Bruner's voice, as well as those of everyone else, is made to sound phantasmal rather than spotlit. While much of the material on Ellison's previous three albums came across like brief and isolated ideas with an impact unaffected by the shuffle function, the shorter pieces here act more like true connectors or proper set-ups/interludes. The 12 minutes from "See Thru to U" through "Only if You Wanna" make for the album's least divisible section. It begins with lithe and slightly unsettling pattering and closes with a futuristic, organic-synthetic jazz trio piece. Somewhere in the middle, there's "The Nightcaller," the closest the album gets to dancefloor funk like Cosmogramma's "Do the Astral Plane" -- that is, until the last minute, when the gliding/chugging beat stammers and switches to a delirious strut. For all the elegiac and turbulent moments, several tracks, including the majestically wistful "Getting There" and the cascading "Until the Colours Come," are gorgeously starry and even lullaby-like, laced with ear-perking flourishes. And then there's the alien critter voice on "Putty Boy Strut," and the bizarrely bleak and comical "Electric Candyman," featuring Yorke, which arouses some serious cognitive dissonance by provoking thoughts of Tony Todd and Beyoncé ("Say my name, say my name, say my name"). Ellison's trademarks -- skittering and rustling percussion atop slightly irregular drums that knock and thud, for instance -- factor almost as much as ever, but his slight adjustments and increased restraint make this his most accessible and creative release yet. - AllMusic