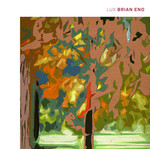 Originally released in 2012, LUX finds Eno expanding upon the types of themes and sonic textures that were present on such classic albums as Music for Films, Music for Airports and Apollo: Atmospheres and Soundtracks. Eno sees it as a continuation of his Thinking Music project that includes Discreet Music and Neroli.

Brian Eno's new solo album, first created for an art installation, consists of four tracks spread across 75 minutes. It suggests that there's a reason Eno's name has become synonymous with "ambient" and why his thoughts on the music remain the gold standard.
8.0 Pitchfork