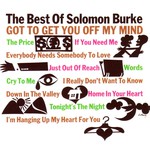 Released for the first time on 180 Gram Audiophile Vinyl: Solomon Burke -The Best Of Solomon Burke. Originally released in 1966, this stunning collection boasts 12 of his biggest Atlantic Records hits. Burke set the stage for many superstars after him with his smooth & powerful vocals & large catalog of hit songs. Tracks like Cry To Me & Everybody Needs Somebody To Love we're even covered by the The Rolling Stones & Tom Petty. We will sorely miss the man, "King" Solomon Burke- his music will live on forever. Faithfully remastered from the Atlantic tapes.