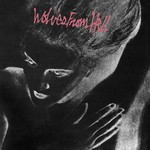 Destry Hampton & The Wolves From Hell
Angel Of Madness (7")

There is no sense in trying to outdo Angel of Madness, Destry Hampton's bona fide cult classic. Caught up in the international punk zeitgeist, Hampton laid down his une saison en enfer in late '77 in the North Beach district of San Francisco with a pack of friends that included Danny Mihm from The Flamin' Groovies.

Buzzsaw riffs and manic leads underpin Hampton's feral, reverb-doused vocals ("I'm feeling mean / Screwed up tight / O I'm ready to kill"). Angel of Madness is one of the most elusive records of the era: manufactured through legendary oddball label Moxie Records, stamped on Hampton's own Z-Bop imprint, and distributed through a couple local record stores. Eventually the remaining stock was stolen from storage.

Deranged like The Mentally Ill, yet grounded in Crime's impeccable rock sneer, the ignoble savagery of Destry Hampton proves its supremacy in the annals of Killed By Death's many volumes. This first-time reissue comes from the original master tapes.