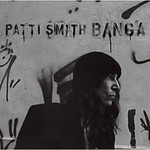 Inspired by Smith's unique dreams and observations, Banga's poetic lyrics are a reflection of our complex world a world that is rife with chaos and beauty. Praised for her storytelling abilities, Smith has crafted an album that captures a wide range of human experience. There is an exploratory spirit in the songs that make up Banga, including a melodic overture imagining the voyage of Amerigo Vespucci to the New World in 1497 ("Amerigo"), a rock song for the people of Japan in the wake of last years earthquake ("Fuji-san"), a classic ballad in memory of Amy Winehouse ("This Is The Girl"), an improvised meditation on art and nature ("Constantine's Dream") as well as a birthday song written for her friend Johnny Depp ("Nine").

11. Constantine's Dream
12. After The Gold Rush