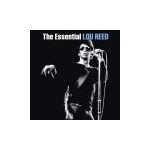 One of the most important figures to emerge from the New York art & music movement of the 1960s & 70s, Lou Reed has influenced generations of musicians. The principal songwriter and guitar player in experimental group The Velvet Underground, a band that had more success after it had disbanded than when they were together, Reed released his solo debut in June 1972 to a muted response.

It was his sophomore album Transformer that showed Reed could break out beyond the NY underground. Produced by David Bowie, himself a VU fan, Transformer mixed glam-rock with the palpable energy that Reed's songwriting emitted, and contained several songs that would remain classics long after he passed. "Vicious", "Walk On the Wild Side" and "Satellite of Love" all feature on this collection.

The Velvet Underground's "Sweet Jane" and I'm Waiting For the Man" are just a couple of the other instantly recognisable works included on this double CD; an excellent compilation if you want an overview without committing to his entire catalog.

The Best of Talking Heads