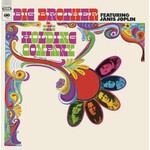 Besides being the album that introduced the world to Janis Joplin, Big Brother and The Holding Company's first release stands as one of the classic recordings of '60s rock. Joplin had added her fiery wail to the archetypal Haight-Ashbury acid-rock quintet only months before it entered the studio to make the album, and for the sessions, she shares vocal duties with bassist Peter Albin and guitarist Sam Andrew.

Thanks to the LP's raging single, "Down On Me," it was immediately clear to radio audiences of the time that the Texas-born singer was a new force to be reckoned with. In addition to Joplin's inimitable blues cry, Big Brother's other key strength lies in the scraping, distorted guitars of Sam Andrew and James Gurley, which are in heavy abundance on such choice cuts as the trippy "Light Is Faster Than Sound," the punkish "Women Is Losers," and the group's fuzzy, droning remake of Moondog's "All Is Loneliness."

Bye, Bye Baby
Easy Rider
Intruder
Light Is Faster Than Sound
Call On Me
Women Is Losers
Blindman
Down On Me
Caterpillar
All Is Loneliness