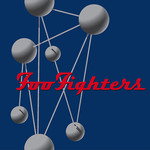 Foo Fighters
The Colour And The Shape (LP)

Produced by Gil Norton, 'The Colour And The Shape' was released through Capitol Records and the group's own Roswell Records on May 20, 1997. The record is the debut of the Foo Fighters as a group, as the band's previous record, 'Foo Fighters' (1995), was primarily recorded by frontman Dave Grohl and friend Barrett Jones as a demo.

Primarily inspired by Grohl's divorce from photographer Jennifer Youngblood in 1996, the lyricism on the record is substantially more introspective and the music more developed. The album's track listing was designed to resemble a therapy session, splitting the album between up-tempo tracks and ballads, reflecting conflicting emotions.

Main singles "Monkey Wrench," "Everlong" and "My Hero" peaked within the top ten on United States rock radio, and the album charted at number three in the United Kingdom.