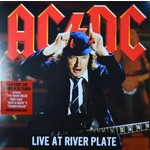 AC/DC follow up one of the more successful live albums of all time with a 19-track recording from three shows in Buenos Aires. Live at River Plate is the band's first new live effort since the double disc 'Live' from 1992.

The audio recording is from the same shows as the 'Live at River Plate' DVD, which was released in 2011. The three shows took place in Argentina in December 2009, in front of almost 200,000 fans over three nights. By then the Black Ice tour was in top form, going on to visit 108 cities across the world.

The new live recording includes seven songs not included on 'Live.' 'Rock N Roll Train,' 'Shot Down in Flames,' 'Black Ice' and 'Dog Eat Dog' are four of the new tunes that accompany hits like 'Back in Black' and 'Hells Bells.'

Side 2:
Shot Down In Flames
Thunderstruck
Black Ice
The Jack

Side 4:
You Shook Me All Night Long
T.N.T.
Whole Lotta Rosie

Side 5:
Let There Be Rock

Side 6:
Highway To Hell
For Those About To Rock (We Salute You)