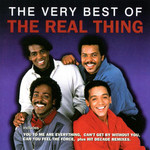 The Real Thing
The Very Best Of

Northern soul had emerged in the north of England when the Real Thing formed in 1970, but the disco/funk/soul quartet couldn't get into the obscure R&B sounds, preferring instead the more progressive soul of the Temptations, Barry White, and funk jams. The Liverpool natives aspired for international success, a dream that went unfulfilled. Original members Chris Amoo, Dave Smith, Kenny Davis, and Ray Lake began by covering and remaking popular American recordings, and experienced payback when Frankie Valli and others covered their number one British hit "You to Me Are Everything." They cracked Britain's Top Ten for the second consecutive time with "Can't Get By Without You."
All Music Guide.