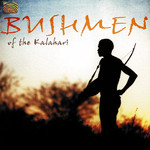 THE BUSHMEN: THE LOST PEOPLE

This album documents the almost extinct Bushman culture in Southern Africa. It contains Bushmen shaman healing rituals, hunting songs, rain-making songs, tracking songs, a spoken history of the Qwii… accompanied on authentic self-built instruments by some of the last Bushmen of the Kalahari Desert.

The Bushmen featured in these recordings come from two main groups: the G-WI KHOE (Qwii Qwii) and the G-ANA KHOE (Xana Qwii). These people were originally from the North West Cape of South Africa - the Molopo River. Many years ago they were forced to flee to Kang in Botswana. From there they fled to Xade in the central Kalahari where they are today - a community of around 7000 people.

The exact origins of the legendary Bushmen (known as the San people) are lost in the mists of time. Their features, so different from other peoples of Africa, perhaps tell of some ancient migration into southern Africa from lands far away, many many years ago.

The Bushmen featured here call themselves Qwii, or 'The First People', and evidence would suggest that they were indeed the first human inhabitants of Southern Africa.

Many thousands of years ago they were a scattered race of hunting people, formed into small family groups. They had no other formal structure or hierarchy, and built no permanent structures. Their weapons were the bow and poison arrows, their diet was game, wild fruit and berries, roots and grubs, and they roamed freely across the land.

With their ability to survive, the early Bushman also brought an ancient holistic philosophy of life to Africa. From what can be deduced from more recent times, their music was not just entertainment, it was the stuff of life itself. It celebrated the elements of life, and in itself was used for healing, for communicating to animals to facilitate the hunt, to ease the passing of all stages of human and family life.

The San are known to be wonderful storytellers, weaving tales of magic, of mystical gods and characters, and lessons of life, along with the dances and music with which they communicate to their ancestors.

The music and the dance of the San, as with all his art, have a distinct function in the circle of life. The Bushman may well be one of the world's first conservationists. The Bushman believes that if he misuses his environment he will incur the anger of the gods. If a plant is picked, the others are left to maintain the survival of the species.

No animal is killed, without its being thanked for the life it provides, in a dance. There are many hunting calls and chants, which are intended to communicate to the animal concerned that although its life will be taken to provide life for the hunter, the hunter will preserve and protect its kind as part of the balance.

Other songs deal with all aspects of San life - from girls reaching maturity, to the perils of infidelity, and thanks for rain.

Mago also plays the dzoma, derived from an ancient four-stringed San instrument, the lohi. Also featured are various solo chants and the nkokwane (a Bushman bow with a calabash played against the chest - producing two notes - of which there are two types here made of either wire or a type of string).

Several tracks feature the bush marimba which is traditionally marked with the mystic San symbols of the moon, the sun, the stars. The setinkane is often tuned outside the agreed western scales: it is custom-made for the player, and may be tuned to the elements such as the wind, or rain. Bushman bamboo flute also features on some tracks.

16. LOHI (The instrument played by our great great forefathers) - 2:39