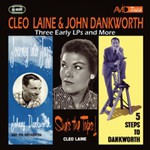 2008 is the year of Dankworth & Laine as they both celebrate their 80th birthdays with a nationwide tour taking in venues across the country from their own Stables to the Barbican and even the grandeur of Hampton Court Palace!

Over at AVID headquarters we continue our occasional series of Dankworth and Laine releases (see "Spread A Little Happiness" AMSC 854 and "About 42 Years Later" AMSC 919 with Danny Moss) with a new release on the AVID Jazz label.

Avid have taken three classic early albums in their entirety along with some extra bonus material and completely re-mastered them for your listening pleasure. Cleo Laine kicks the first CD set off with an early EP entitled "The April Age" before launching into her 1957 album " She's The Tops", which of course she was, and indeed, still is! We conclude CD1 with a selection from John Dankworth & His Orchestra before heading into CD2 with the complete albums "Journey Into Jazz" and "5 Steps To Heaven".

These three classic albums feature the cream of British jazz playing in the 1950's and are now all available superbly re-mastered on CD, thanks to AVID Jazz.