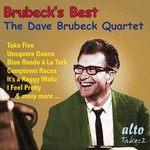 During the 1950's, the Dave Brubeck Quartet became one of America's most successful groups, playing 'West Coast Cool Jazz'. Their second album Jazz Goes to College sold over 100,000 and Brubeck became the first jazz musician to feature on the cover of Time magazine. Before then, jazz had rarely engaged the white middle-class students and 'pop' audiences of the late 1950's that surfed the Elvis phenomenon and indicated the arrival of 'teenagers' with money!

By the end of the decade, the most popular and influential Brubeck Quartet was born. Familiar 4/4 straight-ahead jazz was augmented by complex tempos like 9/8 (Blue Rondo a La Turk) and even 11/4, though to improv sections of Brubeck's compositions frequently loosened into regular swing (which cleverly balanced and therefore enhanced their appeal).