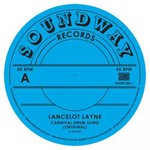 Soundway present a slice of raw Trinidad carnival roots with a progressive twist, courtesy of one of the islands most original and forward thinking musical minds of the post war period. On the flip highlife-techno pioneer DrumTalk morphs it into a dark and twisted electro-tropical groove dripping with rolling distorted synth-lines and filtered vocals.

Lancelot Layne was born and raised in Gonzales, Trinidad - a village near Port of Spain. He was one of the most respected of Trinidad's late 20th century musicians - playing shows and giving lectures at music institutions and universities across the globe. Layne's travels took him to Africa many times and he incorporated many aspects of highlife and other African rhythms into his music.

Layne's impact on the Trinidadian sound was huge and most credit him as being the originator of rapso - a uniquely Trinidadian sound often described as a fusion of Trinidadian soca and American hip-hop that grew out of the unrest of the1970s. Not unlike a Caribbean version of Gil Scott Heron, Layne's early recordings were way ahead of their time mixing social commentary with calypso, Africanism and an upfront lyrical style.

DrumTalk is a producer and DJ from Clapton, East London, fast becoming a leading light in the tropical remix scene. Equal parts techno, house, highlife and soukous, his music sits on the fault-line between the nightlife of East London and the sounds and rhythms of South and West Africa.