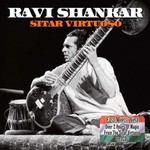 Improvisations is a 1962 LP album by Ravi Shankar. The opening piece is based on music from Shankar's score for Satyajit Ray's 1955 movie Pather Panchali with flutist Bud Shank playing in Indian style. Shankar composed "Fire Night" influenced by the 1961 Los Angeles fires and the song features jazz musicians Shank (flute) and Gary Peacock (bass) improvise over Indian percussion instruments. The concluding ragas are in classical Indian style: the first raga, Kirvani, with South Indian origin, and the second, Rageshri, with North Indian origin.