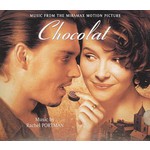 . Rachel Portman's innocuously pretty score for Hallström's innocuously pretty 1999 screen adaptation of The Cider House Rules played by the director's rules, melding pleasantly and forgettably into the glossy period landscape. The score brought her an Oscar nomination, but lacked both the eclectic complexity (Beloved) and the vibrant playfulness (Emma) of her best work. A year later, Hallström's adaptation of the Joanne Harris novel Chocolat was in many ways as charming and as vapid as Cider House. But Portman's score was a different story altogether. Throughout Chocolat, Portman's rich and airy melodies float sweetly across the screen, mischievously hinting at hidden meanings and darker themes. The music does not so much capture as create the whimsical and mysterious atmosphere of the film, blending breezy French orchestral allusions with otherworldly Andean flutes and rambling gypsy guitars in an effective sonic representation of the cultural clash between Juliette Binoche's South American mystic, Johnny Depp's Irish river rat, and the conservative French town that brings them together. Depp's fans will undoubtedly be delighted by his impressive fretwork on the Django Reinhardt and Duke Ellington gypsy guitar pieces that begin and end the soundtrack album. But Portman's is the film's most impressive performance. She proves to be the perfect composer to help Hallström project the tale's subversive feminine energies.