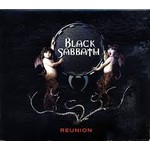 Reunion is a live album by heavy metal band Black Sabbath. It features the original line-up of Ozzy Osbourne, Tony Iommi, Geezer Butler and Bill Ward, the first recording of the four musicians since 1979.

This 2-CD live album was put together from the first two shows after the reunion, at the Birmingham NEC. It also features two new studio tracks - Selling My Soul and Psycho Man.