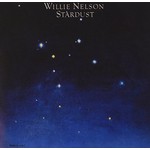 15 years before Tony Bennett made the Great American Songbook safe for the MTV generation, there was Willie Nelson's STARDUST, one of the greatest "crossover" albums in history. The concept was simple: Willie singing a select group of familiar standards by composers such as Carmichael, Berlin, Weill, Ellington, the Gershwins, all in his familiar and inimitable style. Yet the result is not a quite a country treatment of these tunes. For one thing, the great R&B organist Booker T. Jones produced the session in addition to performing with Nelson's superb band featuring the estimable Mickey Raphael on harmonica. One of the enduring pleasures of STARDUST is the interplay between hushed organ, keening harmonica and Nelson's own stately gut-string guitar as well as his beautifully measured, plaintive singing.