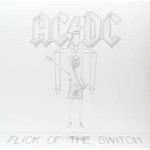 AC/DC
Flick Of The Switch (LP)

The third album featuring 'new' singer Brian Johnson tends to polarise die-hard AC/DC fans. After the fruitful AC/DC & Mutt Lange partnership, the band decided to self-produce the album, which in hindsight suffered from the often crucial 'outsider' ears. Still containing gems like the title track and 'Guns For Hire' it would be several album's before the Oz rockers regained the power that had catapulted them to stadium-filling success.