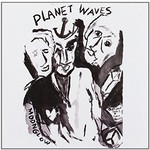 Reteaming with the Band, Bob Dylan winds up with an album that recalls New Morning more than The Basement Tapes, given Planet Waves emits a more intimate tone. All the more appropriate for a collection of modest songs about domestic life. As such, it may seem a little anticlimactic since it has none of the wildness of the best Dylan and Band music of the '60s; just an approximation of the homespun rustic qualities of their previous collaborative efforts.

Considering that the record was knocked out in the course of three days, its unassuming nature shouldn't be a surprise. Stand out tracks on the album "On a Night Like This", "Something There Is About You" and the lovely "Forever Young" show that even in Dylan and company's relaxed moments there is enough to reward the listener's effort.