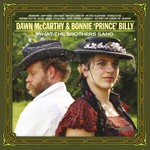 After years of playing the role of guest vocalist and harmony arranger-in-chief for Will Oldham/Bonnie "Prince" Billy, Faun Fables' Dawn McCarthy finally gets to split the bill on What the Brothers Sang, a lovingly crafted, laid-back collection of songs from the vaults of the Everly Brothers that are as respectful as they are idiosyncratic.

Recorded and mixed by David Ferguson (Johnny Cash, Del McCoury Band), and backed by a small army of seasoned session musicians, Oldham and McCarthy approach the songs -- almost all of which came up for air in the '60s and reside (more or less) in the deep end of the duo's formidable catalog -- in such an honest and open-ended fashion that it's easy to forget where the material was sourced. The pair forgo the brothers' tight, by-the-book harmonies for a more languid, naturalistic approach that uses unison singing as a springboard for harmonic exploration (one of the album's biggest thrills lies in wondering which vocalist will break free first), especially on ballads like "Devoted to You," "Empty Boxes," and the weepy, pedal steel-laden "It's All Over," but they're not opposed to letting loose, as evidenced by the inclusion of likeable yet forgettable open road rockers like "Somebody Help Me" and "Milk Train," both of which, in their original incarnations, benefited greatly from Phil and Don's pop acumen.

Not surprisingly, it's the less propulsive numbers that truly resonate on What the Brothers Sang, as Oldham and McCarthy sound less emotionally constricted at a more measured pace, and when they allow their muses to meet, as they do on highlights like "Breakdown," "What Am I Loving For," and the beautiful closer "Kentucky," the results are transcendent.
All Music Guide.

Side A:
Breakdown
Empty Boxes
Milk Train
What I Am Living For
My Little Yellow Bird
Devoted To You

Side B:
Somebody Help Me
So Sad
Omaha
It's All Over
Poems, Prayers And Promises
Just What I Was Looking For
Kentucky