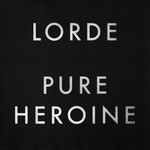 The decision to release her first EP, with plenty of mystery but no marketing or publicity, and just a simple, lifelike illustration, was Lorde's, and it was a masterstroke. Even after 60,000 free downloads on SoundCloud, The Love Club EP still shot to #1 on the New Zealand Album Chart, with Royals simultaneously occupying the top spot in the singles chart - without so much as a video on YouTube. Before any of that success, she was already the focus of a hotly contested bidding war, rapidly being signed up for the UK, US and other major territories, simply on the strength of her music and blindingly obvious potential alone. Tweeted about by everyone from Grimes to Sky Ferreira to Doomtree, and picked up by Buzzfeed, Perez Hilton et al - these are the beginnings of an impending roar, about an artist who is quite simply, cut from a different cloth.