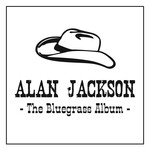 Country star Alan Jackson releases his first bluegrass album. Originals that penned for the album include such titles as 'Blacktop', 'Blue Ridge Mountain Song' and 'Mary'. Covers on the abum include The Dillards' 'There Is A Time', John Anderson's 'Wild & Blue' and a ¾ time version of Bill Monroe's seminal 'Blue Moon Of Kentucky'. A group of some of the best players and singers came together, emerging in a matter of days with the completed acoustic album.