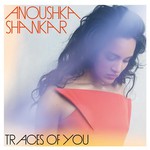 Anoushka Shankar
Traces Of You

After the great success of her debut album Traveller, Anoushka Shankar returns with another outstanding recording Traces of You, featuring three new songs with her half-sister, Norah Jones.

Traces of You developed from the notion that everything in the universe leaves an indelible mark - or a subtle trace - on everything it encounters. Inspired by her relationships, multicultural upbringing and global career, Anoushka traces a journey of love, change and loss.

Produced by British composer and multi-instrumentalist Nitin Sawhney, Traces of You features contributions by Anoushka's longtime associates, tabla genius Tanmoy Bose, flutist Ravichandra Kulur, and percussion wizard Pirashanna Thevarajah. Other highlights are the collaboration with Norah Jones, and explorations of the unique sound of the Hang drum, played by its foremost exponent, Manu Delago.