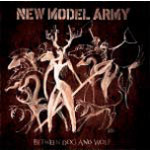 BETWEEN DOGS AND WOLF is New Model Army's new studio album, set for release via Edel/Shock. Formed by Justin Sullivan in Bradford in 1980, New Model Army's beginnings were inspired by Northern Soul, Punk Rock and the incendiary atmosphere of the times. Since then, they have had a
long, creative and eventful journey. They have been massively influential in 'post‐punk', 'folk‐rock', 'political‐rock', 'goth', 'metal' and all kinds of musical sub‐cultures but they have steadfastly refused to belong to any club that would have them as members.

Their music has attracted some of the biggest producers on the planet (Glyn Johns, Tom Dowd, Andy Wallace, Bob Clearmountain) and have built up an almost religious devotion amongst fans.