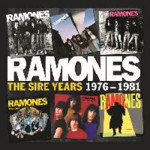 "Hey ho, let's go!" With that call to arms Ramones launched their recording career and changed the face of music forever, spawning punk rock and reinvigorating the ailing art form known as rock 'n' roll. Formed in the Forest Hills section of Queens, NY in 1974, the Ramones were completely original, forging a whole new sound and direction for music and giving birth to punk.

Rhino explores the incomparable footprint of the Ramones' musical legacy with a boxed set featuring the band's seminal first six albums. RAMONES: THE SIRE YEARS (1976-1981) includes the band's 1976 eponymous debut: LEAVE HOME (1977), ROCKET TO RUSSIA (1977), ROAD TO RUIN (1978), END OF THE CENTURY (1980), and PLEASANT DREAMS (1981), each presented with their original running order and artwork.