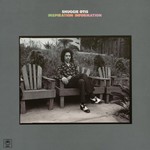 Ignored upon its release in 1974, Shuggie Otis' fourth and last album, Inspiration Information, exists out of time -- a record that was of its time, but didn't belong of it; a record that was idiosyncratic but not necessarily visionary. It was psychedelic soul that was released far too late to be part of any zeitgeist and it was buried at the time.

David Byrne of Talking Heads is a fan; so much so that he reissued the album on CD through his Luaka Bop label. Byrne says Shuggie's "trippy R&B jams are equal to Marvin's and Curtis', but somehow more contemporary sounding...closer to D'Angelo meets DJ Shadow" -- this isn't revolutionary. It can occasionally sound modern, such as on the rolling head trip "XL-30," but only because it's the kind of groove Shadow would sample and build on; the slow, liquid instrumental head trips sound the same way.

Perhaps that's why it can seem more contemporary -- contemporary ears are more attuned to these relaxed, warmly trippy soundscapes. Otis crafted all of this essentially alone, calling on fellow studio musicians to flesh the songs, and it's quite clearly a reflection of his inner psyche, and no matter how much it floats and skates upon its own sound, it's a welcoming, inviting sound. Inspiration Information is equal parts head music and elegant funk, a record that slowly works its way under your skin, and will have you asking yourself why Shuggie Otis isn't a household name the way that say Stevie Wonder, Isaac Hayes and The O'Jays are.
4.5 / 5 All Music Guide.