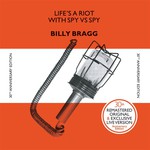 Billy Bragg
Life's A Riot With Spy Vs Spy

To celebrate the 30th anniversary of his seminal 1983 debut recording 'Life's a Riot with Spy vs Spy', Billy Bragg releases a special edition comprising the original album re-mastered, plus a new, live solo version by Billy recorded as a unique encore at his London Union Chapel show in June 2013.

Billy says "Life's a Riot with Spy vs Spy has a very special place in my heart, being the first step on a 30 year journey that has seen me travel to places that I could never have imagined back in '83. Also, as it's only 17 minutes long, I can knock the whole album out as an encore if the fancy takes me - no need to book the Royal Albert Hall and the London Symphony Orchestra"