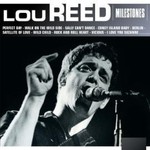 After being guitarist, vocalist, and principal songwriter of the Velvet Underground, Lou Reed's solo career spanned several decades. After departing the group, Reed began his solo career in 1972. He had a hit the following year with "Walk on the Wild Side". Reed was known for his distinctive deadpan voice, poetic lyrics and for pioneering and coining the term ostrich guitar tuning.