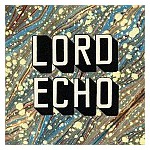 New Zealand producer and multi instrumentalist Lord Echo (aka Mike Fabulous) has been flexing his dual-mastery of 60's production techniques and modern dance floor aesthetics for over a decade now, through a flowing blend of boogie-laced Funk, disco-primed Reggae, futuristic Soul, and timeless African rhythms.

Known worldwide for his production work with NZ's biggest Reggae export The Black Seeds, he drew a groundswell of excitement around his debut solo album 'Melodies' in late 2010. The independent release became a cult classic strictly through word-of-mouth, championed by tastemakers like Gilles Peterson (who played it repeatedly on his BBC Radio 1 show), Oliver Wang ( Soulsides) and Richard Dorfmeister. Re-issues of the album soon followed in Japan and Europe, with vinyl copies quickly becoming a hot commodity among discerning collectors around the globe.

1.Endless Dawn
2. Bohemian Idol
3. Digital Haircut
4.Street Knowledge
5. Molten Lava
6. Put It In My Head
7. The Creator Has A Master Plan
8. Ghost Hands
9. What Is That Feeling
10. Arabeaque