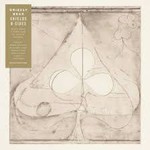 Follow-up to 2012's acclaimed 'Shields' album, including unreleased tracks and remixes. 'Shields' was released to some of 2012's best reviews, with Pitchfork calling it "magnificently epic" and the NY Times hailing it as "enthralling." The band performed tracks from the album on Colbert, Fallon, Letterman, Leno, Austin City Limits, and Ellen, and played their biggest headlining and international festival shows to date.

'Shields: B-Sides' has been released as a 180g vinyl 12" and digital download featuring eight additional tracks (demos and remixes) not included in the original album.

The three demos included on the release were recorded by the band in Marfa, Texas before they finished recording in New York City. One demo, 'Will Calls', which didn't make the album but is included on the expanded re-release.

Side A:
Smothering Green (Bonus Track)
Taken Down (Marfa Demo)

Side B:
Listen and Wait (Bonus Track)
Everyone I Know (Marfa demo)
Will Calls (Marfa demo)