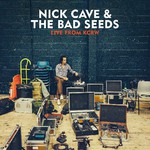 'Live from KCRW' is the fourth official live album in the group's history. It features a stripped-down line-up performing classic Nick Cave & The Bad Seeds songs alongside four tracks from their most recent album 'Push The Sky Away'.

The recordings were made earlier this year at a live KCRW session at Apogee Studio in Los Angeles. The session was recorded by Bob Clearmountain on April 18, between their two Coachella appearances.

'Live from KCRW' is available on CD and double vinyl formats. The vinyl edition features two additional exclusive, un-broadcasted live recordings from the session, 'Into my Arms' and 'God is in the House'.