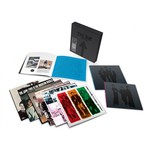 The Jam
The Studio Recordings

One of the most popular bands to emerge from the English punk rock scene of 1977; The Jam had a phenomenal impact on pop music and wider youth culture. In their short career, along with the Sex Pistols, The Clash, and Buzzcocks, they influenced a generation with their music, style, politics and inspiration.

THE ALBUMS:
In The City
This Is The Modern World
All Mod Cons
Setting Sons
The Gift

LP2:
1.The Modern World
2.London Traffic
3.Standards
4.Life From A Window
5.The Combine
6.Don't Tell Them You're Sane
7.In The Street Today
8.London Girl
9.I Need You (For Someone)
10.Here Comes The Weekend
11.Tonight At Noon
12.In The Midnight Hour

LP7:
1.All Around The World
2.Carnaby Street
3.News Of The World
4.Aunties And Uncles (Impulsive Youths)
5.Innocent Man
6.So Sad About Us
7.The Night
8.Strange Town
9.The Butterfly Collector
10.When You're Young
11.Smithers-Jones (Single Version)
12.See-Saw

LP8:
1.Going Underground
2.The Dreams Of Children (B-Side)
3.Liza Radley
4.Funeral Pyre (Original Mix)
5.Disguises
6.Absolute Beginners
7.Tales From The Riverbank
8.The Great Depression
9.The Bitterest Pill (I Ever Had To Swallow)
10.Pity Poor Alfie / Fever
11.Beat Surrender
12.Shopping
13.Move On Up
14.Stoned Out Of My Mind
15.War (Second Version)