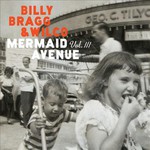 When American folk legend Woody Guthrie died in 1967, at the age of 55, among his stored belongings were thousands of complete song lyrics for which he had not written out music or made recordings. Many of them had been written in the 1940s and '50s, in the Guthrie family home on Mermaid Avenue in Coney Island, Brooklyn. The lyrics remained in boxes for decades, but once his daughter Nora found them in the 1990s, she knew they had to be shared. She approached English singer-songwriter and activist Billy Bragg to select some to set to music. The Chicago rock band Wilco came aboard soon after, with Jeff Tweedy writing music-along with his late bandmate Jay Bennett on some songs-and the band recording with both Tweedy and Bragg on vocals. Natalie Merchant joined the group to sing a duet with Bragg and two solo songs, and guitarist/singer Corey Harris, who wrote two songs and co-wrote one, performed on many tracks.

SIDE 2
5. Ought to Be Satisfied Now
6. Listening to the Wind That Blows
7. Go Down to the Water
8. Chain of Broken Hearts