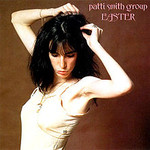 Patti Smith came back from the year-and-a-half break caused by her fall from a stage in January 1977 without having resolved the art-versus-commerce argument that had marred her second album, Radio Ethiopia. In fact, that argument was in some ways the theme of her third. Easter, produced by Bruce Springsteen associate Jimmy Iovine, was Smith's most commercial-sounding effort yet and, due to the inclusion of Springsteen's "Because the Night" (with Smith's revised lyrics), a Top Ten hit, it became her biggest seller, staying in the charts more than five months and getting into the Top 20 LPs.

But Smith hadn't so much sold out as she had learned to use her poetic gifts within an album rock context. Certainly, a song that proclaimed, "Love is an angel disguised as lust/Here in our bed until the morning comes," was pushing the limits of pop radio, and on "Babelogue," Smith returned to her days of declaiming poetry on New York's Lower East Side. That rant (significantly ending, "I have not sold my soul to God") led into the provocative "Rock n Roll Nigger," a charged rocker with a chorus that went, "Outside of society/Is where I want to be." Smith made the theme from the '60s British rock movie Privilege her own and even got into the U.K. charts with it. And on songs like "25th Floor," Iovine, Smith, and her group were able to accommodate both the urge to rock out and the need to expound. So, Easter turned out to be the best compromise Smith achieved between her artistic and commercial aspirations. 4.5 / 5 All Music Guide.