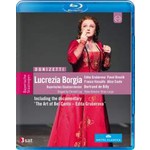 Vera Nemirova's challenging production of Berg's operatic masterpiece Lulu won critical acclaim when first seen at the Salzburg Festival in 2010, and was successfully repeated in 2011, when the production was filmed for DVD.

Musically the production was led with style and assurance by the brilliant young German conductor Marc Albrecht, currently director of the Netherlands Opera. Singing Lulu with allure and passion was the lauded French soprano Patricia Petibon, whose charms gripped an outstanding cast of top European singers.

Lulu is a very rarely performed work, which was also left unfinished by the composer. This performance includes the missing 3rd act, which was completed by Friedrich Cerha, winner of the Salzburg Music Award 2010.

"Christof Loy's serious contemporary production has simple modern clothes… and little scenery… Entries, exits and who is onstage are treated in deconstructionist fashion. This is exciting in Act 2 where the constant presence of the Duca (Alfonso) and his oily henchman Rustighello at Princess Negroni's party is not realistic but hugely underlines the threat to Gennaro, Maffio Orsini and their friends visiting Ferrara. The Slovak soprano legend Edita Gruberová... produces a dramatic performance of concentration, at its most convincing in Act 2 where her age meshes well with the character of distraught mother. The handsome Slovakian tenor Pavol Breslik is a star Gennaro of passion and agility, and Alice Coote is a convincingly butch Maffio. The orchestra play richly for de Billy who sounds at home in this repertoire." (Gramophone)

"the major vocal honours of the evening belong to Pavol Breslik as Gennaro. He sings with excellent diction, variety of tone and good characterisation whilst acting with conviction...If the production and staging lacks cohesion and conviction, thankfully those convictions are present in the pit under the direction of Bertrand de Billy." (MusicWeb)