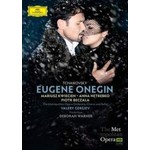 For the third consecutive year, Anna Netrebko starred in the opening production of the season at the Metropolitan Opera, New York; a performance enjoyed by her legion of fans in more than 64 countries, as part of the Met's Live In HD cinema broadcasts.

The Met's new staging of Tchaikovsky's passionately lyrical masterpiece is the first DVD/Blu-ray release featuring Anna Netrebko in one of Russian opera's greatest and most demanding roles.

This greatest of Russian operas is conducted by the Music Director of the Mariinsky Theatre, St. Petersburg, Valery Gergiev.

Deborah Warner's new production, staged at The Met by award-winning actress Fiona Shaw, moves the drama from the 1820s of Pushkin's poem, to the more intensely psychological era of the opera's composition, in the 1870s.

"Netrebko convincingly projects the teenage Tatiana's inwardness and sensitivity...Beczala, bookish and intense as Lensky, is deeply moving during the humiliating party scene and duel...Gergiev's conducting is rather easygoing at first - Tatiana's letter scene lacks intensity until the final few bars - yet takes off in the following scene and flies to the end." (BBC Music)

"Gergiev conducts a passionate account of the score, much of it taken very slowly...Kwiecien has enormous experience in the title role and plays the cad well in Acts 1 and 2...In a show-stopping Letter Scene, Netrebko conveys that first, uncertain declaration of love perfectly...She could easily have been the reigning Tatyana of the past decade." (International Record Review)