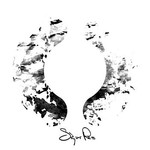 Sigur Ros is an Icelandic post-rock band from Reykjavík, which has been active since 1994. Known for its ethereal sound, frontman Jónsi Birgisson's falsetto vocals, and the use of bowed guitar, the band's music is also noticeable for its incorporation of classical and minimalist aesthetic elements.

() consists of eight untitled tracks, divided into two halves which are divided by 36 seconds of silence. Jónsi sings in Hopelandic, a language of the band's own invention.

() has been reissued by XL Recordings.