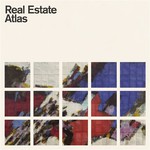 The most collaborative Real Estate record to date, Atlas was written by Martin Courtney, Matt Mondanile, Alex Bleeker and Jackson Pollis while cruising through the Arizona desert and during a presser in Madrid, in a practice room in Greenpoint, Brooklyn and in an attic in the band's hometown of Ridgewood, New Jersey. It was recorded in the summer of 2013 in Chicago with Tom Schick (Sean Lennon, Low, Cibo Matto) at Wilco's loft studio where new member Matt Kallman (formerly of Girls) joined the fold on keyboards.

Atlas is intimate and spare. It conjures quiet, late-night drives down wooded highways, rural rambles with friends (and maybe a love interest) on the sunniest afternoons of the year, and hazy summer evenings spent alone, thinking back to those times and the people who were with you for them. You can catch glints of Galaxie 500, Little Wings, Luna, Neu, Nick Drake, and Pavement, and also Fairfield Porter, Milton Avery, and Albert York. It's a precise and taut, uniquely American variety of impressionism, cut through with a melancholia that can feel variously heartbreaking and newly wise.

The cover seems important. It shows sections of a mural by a Polish artist named Stefan Knapp that hung for more than 30 years outside a department store in North Jersey that went under in the '90s. For a time it was regarded as the largest mural in the world. The band grew up a few minutes away and spent years driving by the abandoned building and its monumental painting.

1.Had To Hear
2.Past Lives
3.Talking Backwards
4.April's Song
5.The Bend
6.Crime
7.Primitive
8.How Might I Live
9.Horizon
10.Navigator