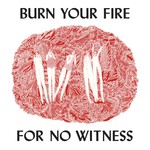 Angel Olsen
Burn Your Fire For No Witness

Many of the superlatives describing Angel Olsen refer to how seemingly little it takes for her to leave an audience speechless, even spellbound. But Olsen has never been as timid as those descriptors imply, and the noisy, fiery hints in her earlier work find a fuller expression on her newest LP, Burn Your Fire for No Witness.

Here, Olsen sings with full-throated exultation, admonition, and bold, expressive melody. Also, with the help of producer John Congleton, her music now crackles with a churning, rumbling low end and a brighter energy.

Olsen first gained notice as the stand-out eccentric in Bonnie "Prince" Billy's mysterious band the Babblers (given that all six of them were known perform in hooded pajamas and sunglasses, this is saying something).

In 2010, she released an arresting tape on Bathetic called Strange Cacti, which gave off the impression that she'd recorded it after falling down a well, trying to sing loudly and cavernously and urgently enough to be found. And she was, more or less-her cult following multiplied with the release of 2012's excellent Half Way Home, a surreal and lyrical collection of folk songs that sounded a bit like Vashti Bunyan playing a midnight game of Ouija.