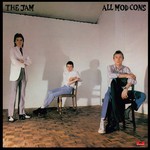 The Jam
All Mod Cons (LP)

An album that, according to Mojo magazine, "encapsulated life in dull mid-'70s suburbia with sharp, faintly surreal character songs", the Jam's 1978 album for Polydor is considered by many to be their finest achievement.

Their third record within 18 months, the LP's title might be meant a little ironically considering Messrs Weller, Foxton and Buckler are featured on the cover in a near empty room, this after having inadvertently kick-started a mod revival across the UK.

A transition from the more straight ahead punk attitude of their first two albums, all the songs were written by Paul Weller, except for a cover of the Kinks 'David Watts'. Produced by Vic Coppersmith-Heaven and Chris Parry, it was ranked at No. 50 of the 100 Greatest British Albums Of All Time by Q Magazine, who reckoned, "The past met the present on All Mod Cons and the sparks flew in a white-hot Rickenbacker fusion of punk, pop, psychedelia and R&B".

The album closes with the classic Jam single, 'Down in the Tube Station at Midnight'.