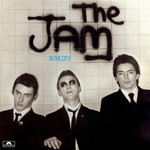 The Jam
In The City (LP)

Originally forming in Woking, Surrey in 1972, the Jam, fronted by guitarist and singer Paul Weller, and backed by Bruce Foxton on bass and Rick Buckler on drums, truly benefited from London's nascent punk scene of the late 1970s; this, despite their resolutely mod revivalist image. With a look that paid homage to the The Who and the Kinks a decade earlier, they released In The City on Polydor in May 1977, reaching a UK peak of No.20. In The City's title track was released as the band's debut single a month earlier, making a respectable Top 40 showing. The album's 12 tracks, spread across a bold, energetic and clamorous 32 minutes, features ten Weller originals, as well as a cover of Larry Williams' 'Slow Down' plus a quirky take on the Batman theme tune.