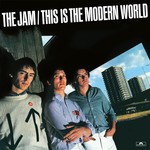 The Jam
This Is The Modern World (LP)

This album, regarded as a slightly forced follow-up to the debut by some, was 'rush-released' a few months later at the end of 1977. However, it features a distinct maturing in Weller's song-writing with more contemplative, slower songs such as Life From a Window, Tonight At Noon and I Need You (For Someone). These songs clearly show Weller's growing confidence in more adding more personal feelings and are inspired by the Liverpool poets, particularly Adrian Henri.
Also includes the classic punk anthem Standards and the hit single The Modern World.

Side One:
The Modern World
London Traffic
Standards
Life From A Window
The Combine
Don't Tell Them You're Sane

Side Two:
In The Street Today
London Girl
I Need You (For Someone)
Here Comes The Weekend
Tonight At Noon
In The Midnight Hour