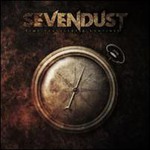 Sevendust didn't waste any time getting 2014 started the best way they know how: being holed up in the recording studio to create their long-awaited and highly-anticipated acoustic album. The Atlanta band entered Architekt Studios in Butler, NJ to record their highly anticipated and much-talked-about acoustic studio album. It will be a collection of 2014 songs, along with re-recorded Sevendust classics. Newly re-recorded songs will include: "Black," "Gone," "Denial," "Karma," "Trust," and "Crucified." Six new songs for 2014 have also been written and recorded for the acoustic album.