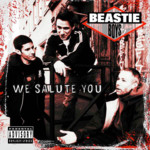 Beastie Boys
We Salute You

Mike D, MCA and Ad-Rock aka Beastie Boys where the first ever white Hip-Hop group to break the mainstream and their Def Jam released "Licensed To Ill" is now considered to one of the best rap albums of all time. Not only did they put Brooklyn on the map and get everyone wearing WV signs, but they also continued to break the mould of Hip-Hop with killer tracks such as "Intergalactic", "Sure Shot" and "Sabotage" all picking up major awards and charting in various different countries. Here this release pays homage to the talented trio and gives us some rare and hard to find tracks, making this a real treat for any Beastie fan.